My fellow Americans, for better or worse, we will be voting for a new president this year. If you follow the "news" on social media then it's hard to find any candidate worth voting for. According to all the "experts" on Facebook, there is nothing good about any of them and all kinds of good about all of them. It just depends on the meme of the moment. Let's look at a whole different view of this matter before you decide that you are moving out of the greatest country on Earth depending on the election outcome.

Have you ever stopped looking at all the rhetoric on Facebook and Twitter and tried to look at this mess without influence? Has it occurred to you that it makes no difference who is the President of the United States?

History Lesson #1 - When states leaders gathered together in 1787 to script the United States Constitution, their goal was simple. They wanted to create a government that was fair but would be limited in its power. Thus they created the three branches of governments; legislative, judicial and executive. No one piece can do all. For example, the President can negotiate a treaty but the Senate must ratify it with a 2/3 vote. Another example is Congress introduces bills to become law, but the President can veto the bill stopping it. However, Congress can, with enough votes and support, overturn a veto. The point is, there is a process.

That is why it is so ridiculous to fall into the trap of believing that any candidate is going to nullify the Second Amendment or "come take your guns". It's not that simple. It's not going to happen. As bad as you think Congress is (and believe it they are that bad), it just seems unrealistic that they would allow something like that to happen. It's unrealistic to think the votes are there. Recall when President Obama joked and said that he cannot just come take our guns because he was bound by the law of the land? He was right and he knows it.

My Fellow Americans, let me shift the conversation away from the presidency for a little because it is of the opinion of this author that the real problem is with Congress and some other parts of the system. 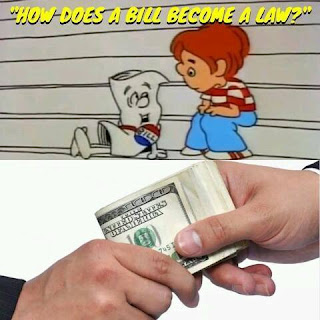 With that being clarified, now look at the problems that we are facing today; poverty, crime, hunger, homelessness, unemployment, high corporate taxes, etc. No one is saying that some of this is not the fault of the president or others in his administration. There is enough argument on both sides of the table to fancy a discussion on it. However, the president did not single-handedly raise corporate tax, cause hunger, make companies fail thus ruining economies around the country. Who is in charge of making laws? Who raises and lowers taxes? Who introduces crime bills? The answer is Congress. Who influences Congress? The president...and others. Wait, others? Yes. Have you thought about the corporations and lobbies that influence Congress? Some money here and some promises there and you have some legislation being introduced. Someone once asked me what I would do with the money if I ever won the lottery. I told him about all the great things that I would do to free myself from debt, help my children, buy a nice home. He said that he would "buy a Congressperson and make some changes". Think about how true that statement is; you can buy yourself a Congressperson. That is all a lobby does or special interest groups; they are buying legislation. If you remove that money from Washington, you may actually remove the corruption and get some real work done for the betterment of Americans.

I could go on for hours and words but I'd probably begin to bore you. All I really want is for you to open your mind and think on this a little. Everyone is looking to memes and fly-by-night Internet "news" agencies to tell them who to vote for as president. The real issue is who are you voting for in Congress and is that person after your best interests? Because that is the person that matters. What does not count is whether Hillary Clinton is a liar, Bernie Sanders is a Communist, Donald Trump is a fake or that Marco Rubio has no experience. In the words of Hillary Rodham Clinton, "What difference does it make". Absolutely none.

Posted by Joel Michalec at 11:16 PM No comments: