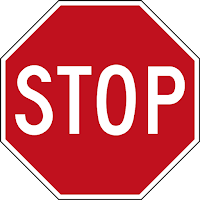 What I find even more disturbing than the fact that I see dozens of people disobey stop signs on a daily basis, is that the first search result on Google when entering "stop sign law" is an article that discusses ways to FIGHT your way out of a ticket for failure to stop! I do not know what has happened in society that there is a great need to disobey traffic laws but I wish that I knew what everyone was in such a hurry for and is it worth the potential life-threatening dangers to get there?

What the law says:

Whenever a yield sign notifying drivers to yield the right-of-way has been erected, it shall be unlawful for a driver of any vehicle on the highway whose traffic is regulated by such a sign to fail to yield the right-of-way to any vehicle approaching on or from another highway or merging roadway or to a pedestrian legally crossing a roadway. If required for safety to stop, the stop shall be made at a marked stop line, but if none, before entering the crosswalk on the near side of the intersection or if none, then at the point nearest the intersecting roadway where the driver has a view of approaching traffic on the intersecting roadway before entering the intersection. Any such driver having so yielded to any vehicle in the intersection or approaching on another roadway so closely as to constitute an immediate hazard or to a pedestrian legally crossing a roadway shall not enter into, upon or across such roadway or highway until such movement can be made in safety. (See citation 1)

This is from the Delaware Code Title 21 but I am sure that every state has a very similarly written law regarding stop signs. If we break it down to its simplest form. the sign states in all caps, S-T-O-P and it cannot be more clear if it wanted to. Your failure to stop at the intersection first and foremost shows that you  have no regard for others around you. It makes no difference whether or not you can see that there is no one around, which in many cases that is what I see. People assume that no one is around and bolts right through the intersection. The sign says STOP. That is the law of the road. The law does not state that you can choose whether you will stop or not. The law is no t open to discussion and it contains no ambiguity. It says STOP. So STOP!

Posted by Joel Michalec at 9:51 AM No comments: